When you create a new ASP.NET Core Razor Pages project, the new project comes bundled with Bootstrap CSS framework and jQuery Javascript library. Files for both Bootstrap and jQuery are placed in a wwwroot/lib folder. The lib folder contains both compressed and un-compressed versions of all files your project may require.

During development, you add more CSS to customize the design of your final application. At times, the CSS you add may end up duplicating formatting under different class names. Coming up with these CSS class names at times also prove to turn out to be a challenge. This is where Tailwind CSS comes in handy. Tailwind CSS is a highly customizable, low-level CSS framework that gives you all of the building blocks you need to build bespoke designs. Each Tailwind CSS class (w-16) maps to a single CSS declaration (width: 4rem;). By combining these classes, you can freely apply any CSS declarations to a page without ever thinking about coming up with CSS class names. Tailwind does not contain any predefined components and this is where Bootstrap comes in handy. You let Bootstrap provide the components like buttons, cards, and more while enhancing these components using Taiwind CSS.

Combining both Bootstrap and Tailwind CSS will however result in a huge increases the size of the CSS files. ParcelJS to our rescue. Parcel is a web application bundler which offers blazing fast performance and requires zero configuration. Using Parcel will allow us to compress and combine the CSS files into a single file. Now we get the best from both Bootstrap and Tailwind CSS and end up with manageable minimized CSS files.

In this post, we create an ASP.NET Core razor web application, add Tailwind CSS to the project, bundle the project asset files with Parcel and finally add the bundling process to our project build process.

Your development environment should already be set up to create ASP.NET Core applications and have Node JS installed.

If however you are starting from a clean slate, you can run the following installations to follow along:

Open a terminal or console window and run the following command dotnet new razor -o ParcelBootstrapTailwind and wait for the project creation process to complete. razor is the template of the project. To see a list of available templates, run dot new --help command. -o creates a folder for our project.

Click Yes when the Required assets to build and debug are missing from ParcelBootstrapTailwind'. Add them? dialog is displayed.

If the dialog closes before you press the Yes button, select View > Command Palette.., type .NET and click on .NET: Generate Assets for Build and Debug.

From the main menu, select Run > Run Without Debugging and a browser page should open with a Welcome message.

Now that our project runs using the bundled CSS library, we can move to the next phase. Back in the text editor, stop the running project by selecting Run > Stop Debugging.

Prepare Project To Use Parcel

We need to do a bit of re-organization before using ParcelJS to bundle our asset files.

Open the Terminal window and run npm install tailwindcss. This command will add the Tailwind CSS package to our project.

Create assets/css/tailwind.css file and update with the following: Make sure @tailwind base; is commented out to avoid conflicting with Bootstrap.

Some CSS class are common to both Bootstrap and Tailwind. We are therefore going to use a prefix for Tailwind CSS to differentiate between Bootstrap and Tailwind classes. Create a tailwind.config.js file within the root of the project by running npx tailwindcss init command from the terminal window. Open the file and add prefix: 'tw-' prefix to use for Tailwind classes. Also, as we are using a Parcel parcel-plugin-purgecss plugin for purging un-used classes, we will therefore add purge: false to disable the purge feature within Tailwind. After these changes, your tailwind.config.js file should look similar to the following:

The final step for adding Tailwind to our project is by adding a PostCSS plugin to our Parcel build chain. Create postcss.config.js file at the root of the project.

If we now run npm run build, we should see that there is an increase in size on the main.css. The size however reduces drastically when we run the npm run publish. 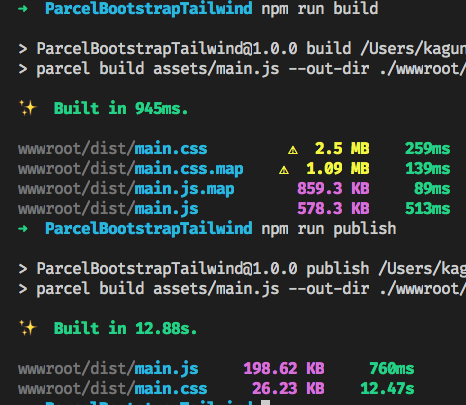 To test whether the Tailwind CSS classes are being used, open _Pages/Layout.cshtml and change the background color of the tag by adding a class="tw-bg-gray-200" class. Also add a gradient to the nav bar by adding tw-bg-gradient-to-r tw-from-teal-400 tw-to-blue-500 CSS classes to the tag. Run npm run build command and select Run > Run Without Debugging from the main menu. You should observe that the home page and the nav bar are now displayed using our new changes.

The Microsoft Build Engine (MSBuild) tool uses properties, items, tasks, and targets to build a project. Properties are key-value pairs which direct MSBuild what to do. You define properties using <PropertyName>Value</PropertyName> elements. MSBuild has its own reserved properties. You reference property values using $(PropertyName) syntax. Items are inputs into the build system while tasks are commands which are executed in order to complete a Target. Targets group tasks together.

In our project, we require properties for assets, node__modules, and wwwroot folders. Open ParcelBootstrapTailwind.csproj and add these properties within <ProjectGroup> as follows:

Next we create our Targets. The first Target will check whether NodeJS is installed and that the node_modules folder exists. If NodeJS is not installed, it will not be possible to proceed with with the build and we request the user to first install NodeJS. If node_modules folder does not exist, we first start by re-installing NPM packages before proceeding with the build. The other two targets will be called depending on whether we are doing a normal build or publishing our application. If we are running a normal build, the build process will invoke npm run build otherwise npm run publish will be invoked. The updated ParcelBootstrapTailwind.csproj should be similar to the following:

From the main menu, select Run > Run Without Debugging and if we typed everything without errors, a browser page should open with a Welcome message. To test for the project publishing, run dotnet publish -c Release -o ./publish from the terminal. You will observe the project will build and create a publish folder at the root of the project. The size of the CSS file within the publish/wwwroot/dist/css/main.css will be much smaller than the one within wwwroot/dist/css/main.css.

Not all of us are good at CSS and designing websites. By using CSS frameworks such as Bootstrap, we can use existing predefined components to create good looking websites. Using the low-level classes provided by Tailwind CSS enhances the look and feel of our websites without having to create custom classes. And when our websites are ready for deployment, we can bundle our website assets with no configuration using Parcel.

In this post, we set up a new project in Visual Studio Code, added Bootstrap and Tailwind and finally bundled our asset files using Parcel. As a final step, we automated the assets bundling commands into the project build process thereby ending up with minified asset files ready for deployment.

Thank you for reading this far and I hope you picked something along the way that can be of use in your current or next project.

Happy Bootstraping and Tailwinding with Parcel!